Aristotelian physics considered movement as a process of change, as opposed to rest that had to be recognized as the natural state. Faced with this idea, Galileo separated the movement of nature from bodies. Rest is not different from movement, only changes in movement require a cause. Furthermore, a body can participate in more than one movement at a time, since none of them prevents the others, being able to combine with each other.

Dance is nothing more than the static and displacement movement that occurs in space and time, performed with part or all of the performer’s body, with a certain rhythm as an expression of individual feelings.

In other words, it’s the mass of the individual in free movement through space over a period of time. In mathematical terms we obtain that the relationship between the three factors gives rise to the expression:

P being the impetus or momentum of each space that make up this project. 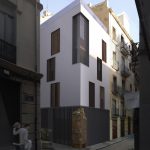